For Forest Punk, Cologne-based photographer Dieter Klein tracks rust-speckled vintage automobiles into the depths of neglected junkyards and verdant woods, where they have sat, untouched, for decades.
The project began when the photographer stumbled across a seventy-year-old Citroen set within gnarled branches and a cluster black elder flowers. Since that day in the west of France, visions of long-forgotten vehicles have lingered, compelling the photographer to hunt throughout the world for their skeletal remains. Klein has sought these relics of 20th century mobility everywhere from Belgium to the United States, and he has no intention of stopping.
Klein’s fascination, he explains, comes not from any attachment to the cars themselves but a thirst for the mysterious ways in which nature envelopes and repurposes each specimen. Like dinosaur bones, they tell the tales of incidents and peoples unknown. With each passing year and the resultant decay, the narrative of each car becomes more elusive and enigmatical, slipping slowing into the realm of fairytale and mythology.
While in many cases he cannot retrace the history of the vessels, some sites are more discernible and conspicuous than others. In Sweden, for instance, Klein visited a car yard where vehicles had been disassembled during the 1950s. Because the site stood a mere two miles from Norwegian border, the car parts were then taken piece-by-piece over into the neighboring country, where the importation of whole cars was forbidden. In the dark blanket of night, says the photographer, the automobiles were reassembled, and they have been left nearly untouched and unseen for approximately thirty-five years.
Part of what motivates the photographer on his search is the way in which these artifacts exemplify the inevitable forces of nature. Despite the ways in which we continue to beat the earth into submission, she is seen here as a phoenix rising, her delicate branches overpowering the brute, metallic force of man.
Klein is now working on Forest Punk II, having finished and published Forest Punk I. 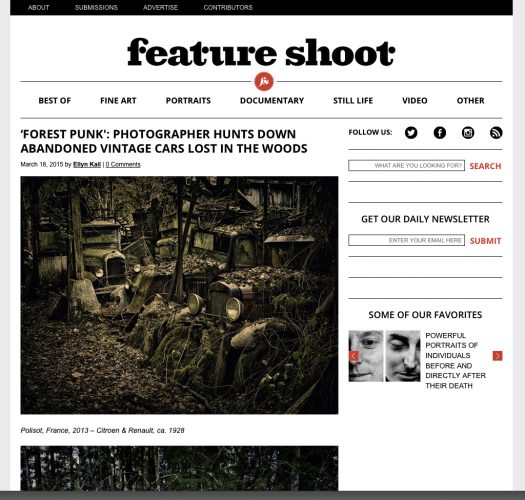 The Magical and Decaying Places Where Cars Go to Die

Where do cars go when their driving days are done? Many are crushed or recycled, but others are left out in nature to decay and crumble. It’s not the most efficient—or environmentally sound—method of disposal, but for Cologne, Germany–based photographer Dieter Klein, it’s the most magical.
Six years ago, Klein was in France when he discovered a 70-year-old Citroën truck in some bushes near the town of Cognac. “More than my interest in the car itself, I was struck by the impact of this extraordinary process of transformation,” Dieter said via email. “This scenery was like an image out of a fairytale story: Someone put a spell on this car.”
Dieter was captivated by the image of the man-made machine reclaimed by nature, and became determined to find others like it. Through online research and word-of-mouth referrals, he began traveling Europe in search of other automobile graveyards.
“I am looking for the history of a car and its transformation in the beautiful landscape. My fascination comes not from any attachment to the cars, but in creating images, slipping into the realm of fairytale and mythology,” he said.
Along the way, he’s come across places so incredible that viewers of his work often believe they’re imaginary. (They’re not.) In Belgium, he found a small forest where Allied forces had left some cars after WWII. The owner of the land, he said, wanted to leave the cars there indefinitely, as a sort of time capsule, but he was compelled to clean the place up in 2011 after it became too flooded with visitors. In Sweden, he found a yard full of cars that had been transported piece by piece during the 1950s from neighboring Norway—where exporting whole vehicles was prohibited—and reassembled.
In 2013, Klein self-published a book, Forest Punk, that includes these images. Last June, he made a trip to the United States to look for more material for a new book—he’s currently raising funds on Startnext to support the publication—and visited auto graveyards in seven Western states.
Klein’s ongoing project has taken him around the world, but one of his favorite places he found was only 30 miles from his hometown, Cologne: “A car dealer had a funny idea. When he turned 50 in 2000, he arranged 50 cars made in 1950 as a sculpture park in his garden and threw a big party. Some friends got really angry when they saw, for instance, an extraordinary Jaguar XK-120 left alone on purpose. In restored condition, this car could sell for $120,000.” 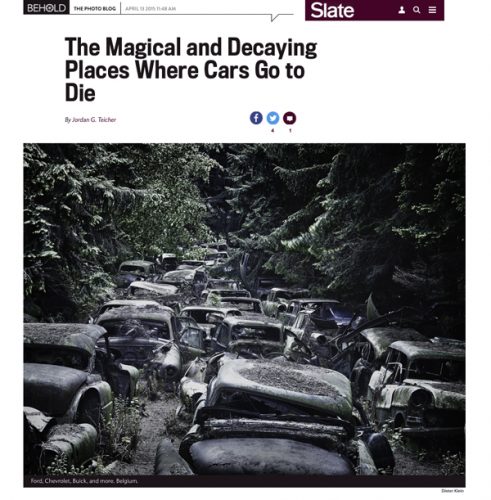 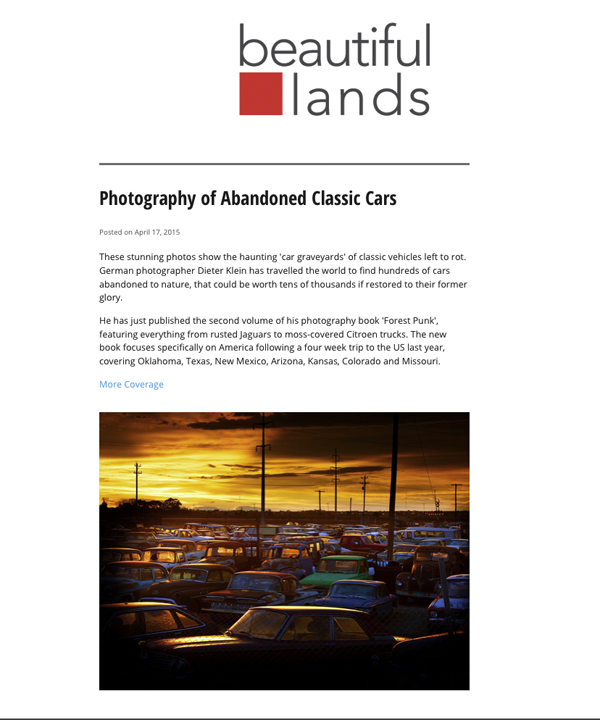 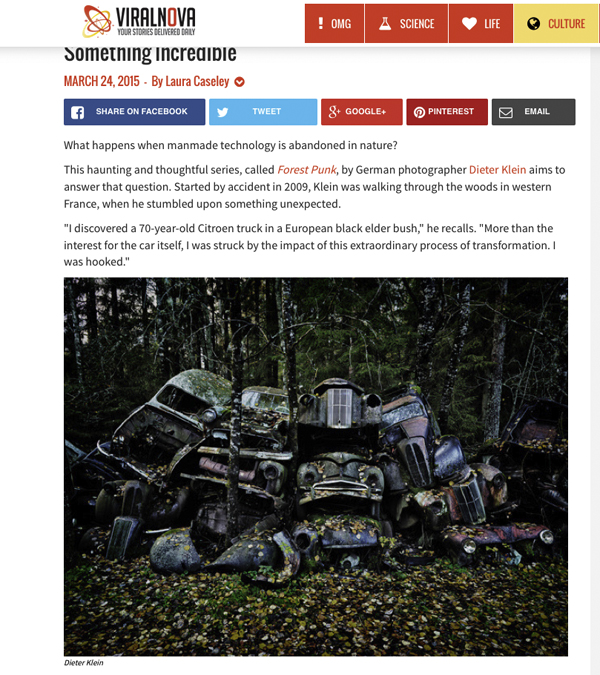 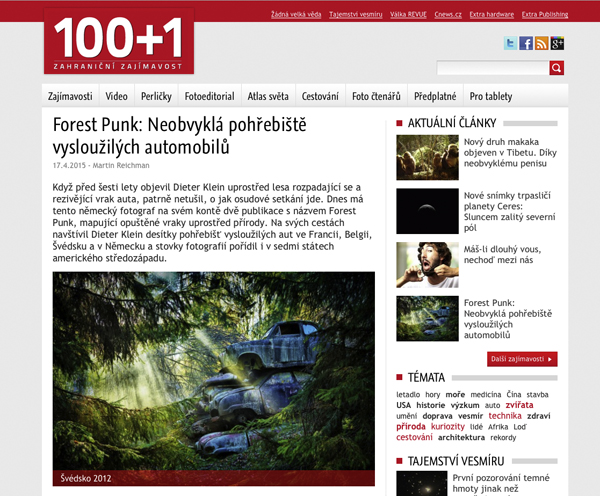